An associate at Keller Williams in Bakersfield at the time, Tracy set out on a routine errand to the drugstore. But when the pharmacist asked her a simple question, she realized she couldn’t speak. Tracy tried over and over, but was unable to utter a single word. She wrote the episode off to fatigue or hunger, but moments of memory loss and confusion persisted, and weeks later, Tracy suffered a seizure at a traffic light. After being rushed to the hospital, an MRI revealed a golf-ball sized brain tumor above her ear. The tumor was successfully removed in surgery, but new challenges arose.

Tracy was released from the hospital and returned home, only to find medical bills in excess of $30,000 waiting for her. She was not allowed to drive for six months due to her condition, so how could she earn a living as a real estate agent? How could she possibly pay these bills?

When a friend in her office suggested reaching out to KW Cares, she resisted. That was for cancer patients and folks who’d lost homes to natural disasters, she thought. Luckily, her friend understood that KW Cares can help agents and their families through a wide array of life altering events. She encouraged her to take the next step in the process. Tracy applied for a KW Cares grant. As luck (or fate) would have it, she received an email saying her grant was approved while she drove past the very same drug store where her troubles first began.

Having experienced the value of KW Cares, Tracy now encourages fellow agents to support the cause:

To help those just like Tracy who are faced with hardship after life altering events, Donate Today! 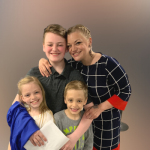 Helping a Kid Feel Like a Kid AgainOur Stories